The current state of America’s government school systems is appalling to say the very least.

Far-left socialist teachers, with the assistance of overly powerful teachers unions, have taken it upon themselves to brainwash young minds to become outright communists.

But this top teachers union is taking things to a whole new level by promoting horrific practices aimed at grooming young children.

Teachers unions are the biggest threat to the future of America

When looking at all of the domestic threats facing the United States right now, few are as fundamentally dangerous as teachers unions.

These immensely powerful unions have overwhelming control over what is being taught to the children of this nation, and these curricula often include anti-American, Marxist fundamentalism such as Critical Race Theory.

The socialists running these unions, as well as the far-left teachers who have joined their ranks have taken a page out of Mao Zedong and Joseph Stalin’s playbook by targeting children from a young age for indoctrination.

Brainwashing these young minds now can ensure future Democrat votes, or so the thinking goes.

But as of late, things have been taken to a whole new level in regards to teaching children about LGBT themes and sex.

One of America’s largest teachers unions, the American Federation of Teachers, led by the screeching harpy known as Randi Weingarten, has unveiled a program to spend valuable class time teaching children about alternative pronouns.

On the AFT’s website, the lesson plan called for teachers to instruct that “something as simple as a Student Introduction Card could make a student feel seen and affirmed.” 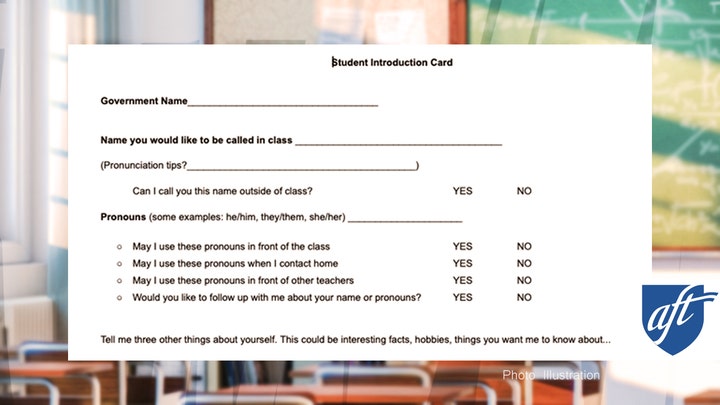 This card asks questions such as “Can I call you this name outside of class?” and “May I use these pronouns when calling home?”

Yes, you read that correctly, the AFT is actively encouraging teachers to discuss “pronouns” with their young students and evidently keep these pronouns from their parents.

And these are not just he/him pronouns, but they also classify “two-spirit persons” as a pronoun as well.

The list of potential genders goes on and on.

Why parents should be so alarmed by these “woke” agendas

The bottom line is that children should not be learning about these perverted and backward social theories in schools.

Any teacher will tell you that classroom time is very valuable, and wasting it on this garbage is unacceptable, especially with America trailing the world in science and math scores.

However, this issue is much more important than that.

If this was all about wasting class time, then that would be one thing.

This lesson plan instead appears to be an attempt to groom young children into sexual deviants and, at the very least, brainwashed into “woke” sheep.

There is no place for this sort of woke garbage in schools, and teaching children that they can be two-spirited woodland creatures instead of learning their times tables will have devastating effects on the future of this nation.

The moral of the story is, the AFT and other unions are actively trying to groom children from a young age, and now is the time for parents to stand up and fight back.

Joe Biden is pulling a Tyrant Trudeau with his latest gun...

The Joe Biden economy is causing a blue Christmas for kids...

Chuck Schumer is all smiles after learning Democrat may do even...

Kevin McCarthy just promised to do one thing as Speaker that...

Joe Biden is following in Jimmy Carter’s footsteps with his disastrous...

Joe Biden is in panic mode with this major strike looming...

Arizona’s elections still aren’t certified after this major announcement from the...

Raphael Warnock has a lot to answer for leading up to...