Americans just paid the most for gasoline for Thanksgiving travel that they have in the history of the country.

President Joe Biden’s energy policies have resulted in soaring prices at the pump.

And now voters are sounding off on what they want out of an American energy policy – and it’s making AOC lose her mind.

Leader of the radically woke Squad, Rep. Alexandria Ocasio-Cortez of New York has made a name for herself by pushing for extreme “green” measures at the expense of the economy and even Americans’ individual freedom.

The “Green New Deal” is the industry-killing, freedom-stealing, principle piece of legislation.

If it were ever to pass, Americans would see energy prices balloon well beyond what they’ve already experienced under President Joe Biden’s watch.

After nearly two-years of soaring gas costs – American workers are getting fed up.

Beyond the pain at the pump for individual consumers, high diesel prices and looming shortages are exacerbating supply chain issues at every level from transportation to farming.

The higher prices are passed on to what families pay for food, goods, and services.

A new poll from Tippinsights in association with Issues & Insights demonstrates the frustrations workers are feeling. 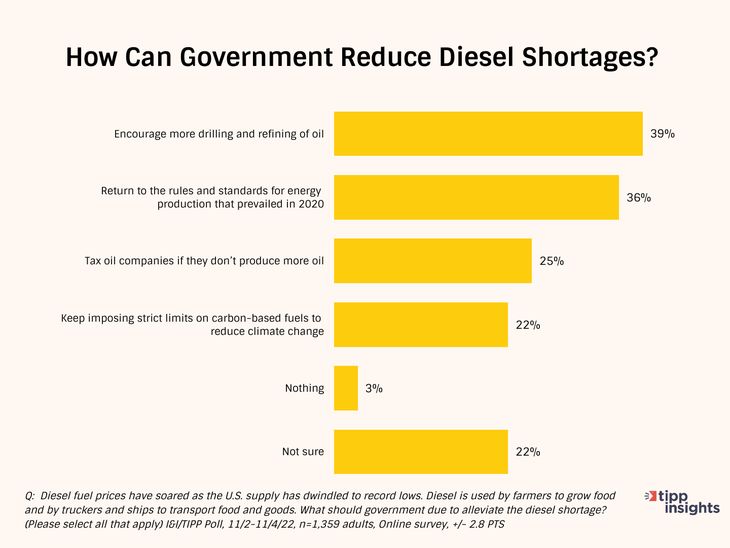 The poll asked respondents, “What should government do to alleviate the diesel shortage?”

They were given six options: “Encourage more drilling and refining of oil,” “Keep imposing strict limits on carbon-based fuels to reduce climate change,” “Return to the rules and standards for energy production that prevailed in 2020,” “Tax oil companies if they don’t produce more oil,” “Do nothing,” “Not sure.”

Another 36% want to see a return to the energy-production standards in place before Joe Biden took over the reins at the White House.

Only 25% of voters believe taxing oil companies that don’t produce more oil is the best solution.

It’s a good thing that the “solution” didn’t poll well – as the taxes would just be passed on to consumers and do nothing to bring down costs.

And 22% want a continuation of the Biden/AOC “green” agenda.

“The answer transcends both politics and the short-term horizon of the holiday season,” writes Tippinsights’ Terry Jones. “Indeed, the U.S. is already suffering slowing demand due to surging inflation for food, manufactured goods and, especially, energy.”

Will the White House listen?

The party breakdown in the survey is not surprising.

“The bottom line is that voters want their leaders to do something about rising fuel prices and their ripple effects,” wrote PJ Media’s Chris Queen while analyzing the poll results. “If this poll is any indication, more voters want to go back to the way things were before the Biden Administration made energy less plentiful and more expensive. It’s just too bad that the White House won’t listen to the people.”